I got more and more nervous: windless days, a broken rear wheel, a budget that I had already overrun by far and which slowly led into financial hardship. At this moment, the mood hit rock bottom and I was close to tears. We neither knew which additional costs would face us, nor if we were able to find a solution that would remain firm despite the incredible strains onto the rear wheel on the gravel roads. It was also not clear how many days we would lose to go to Rio Gallegos, where to find a craftsman and particularly how long it would take to build something robust for us. In addition there was a flu, which further weakened part of the team.

Maybe it wasn’t meant to be?
At this time, I was probably on the verge of giving up and accepting that a boat was probably not made ​​to sail across the country. Since I had started with the implementation of this project, I had faced a lot of problems … But even I have a limit: There is a point at which I am no longer able to cope with the situation and I will have to give in. And now I was already very close to this point. 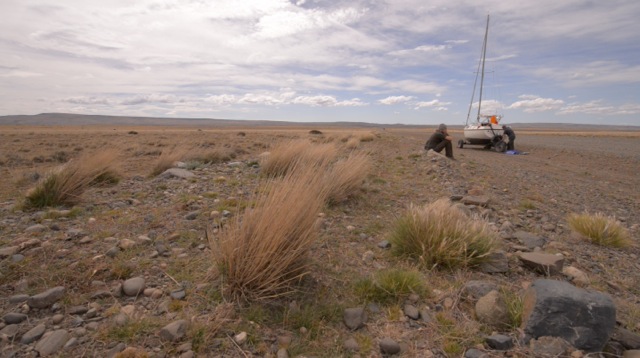 But … give up? Should all these efforts and the energy that had been put in this project up to this point be in vain? In spite of all troubles we have indeed managed to bring the boat into sailing on the ground. And even in the middle of nowhere there should be good craftsmen! Especially here, because without the improvisation skills of many craftsmen one could probably barely survive in this country. My team was the greatest support in this situation because it was not just my vision to sail through Patagonia, we all wanted the project to be continued! We couldn’t and didn’t want to accept that the project came to an end at an early stage due to technical and financial problems.